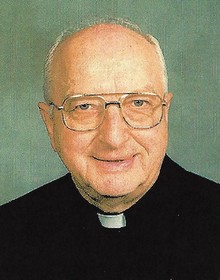 Life lived well for God and others makes dying difficult but peaceful. Msgr. Fedewa’s theme for his priesthood was taken from Mary’s song, the Magnificat - “My being proclaims the greatness of the Lord...for he who is mighty has done great things for me.” The Blessed Mother was a special role model for Msgr. Fedewa and her faith and trust in God’s loving care, humility and a willingness to do God’s will influenced his priesthood. Msgr. Fedewa was called by God to his eternal home June 7, 2017 at Hazel Findlay Manor. Born to Joseph P. Fedewa and Elizabeth R. (Thelen) Fedewa on May 30, 1928 in Riley, MI. Growing up on a farm, he loved the beauty of God’s creation and enjoyed family life with his six sisters and four brothers. His years of schooling were at St. Mary’s, Westphalia, MI taught by the Sisters of Christian Charity. During his eighth grade he felt called to priesthood and entered St. Joseph Seminary in Grand Rapids, Ml. His years of study for the Priesthood took him to Sacred Heart Seminary, Detroit, MI and finally to North American College, Rome where he was ordained on December 8, 1954 during the Marian Year. Preceding him in death were his parents, Joseph and Elizabeth Fedewa, and the following siblings Bemita (Alex Vitek), Mary (Joseph Smith), Odelia (Gerald Thelen), Leo and Alberta Fedewa, Catherine (John VanAcker), James Fedewa, & Joseph Fedewa. Surving siblings are brother, Fr. Matthew Fedewa, sister Margaret Thelen, (Clair Thelen), Sr. Joanne Fedewa, Sister of the Living Word Community, Arlington Heights, IL and sisters-in-law, Mary Ann Fedewa, Janice Fedewa, many nieces, nephews, Fr. Fred Thelen, pastor of Cristo Rey Parish in Lansing. Msgr. Fedewa was gifted in many ways. Keeping up with the “signs of the times” he adapted to the new programs of Vatican II. After Vatican Council II he felt called to further studies along with pastoral assignments. He achieved a Doctor of Ministry degree. To many he was known as a priest of compassion, peacefulness, loving God, family, and parishioners. Faithful to God and priestly responsibilities, Msgr. Fedewa enjoyed golf outings with his friends and competing in scrabble games. Family celebrations and gathering of priests were important. His years of Ministry found him adjusting to new experiences and as a time of positive growth and development Twenty three years of his priesthood were spent in the Lansing Region in seven parishes: St. Mary, Charlotte; St. Ann, Bellevue (twice); St. Therese; St. Michael, Grand Ledge, St. Casmir; St. Peter, Eaton Rapids; & St. Gerard. The other years were spent in Our Lady of Fatima, Michigan Center; St. Rita, Clark Lake; and Holy Redeemer, Burton, and St. Gerard, Lansing. His Sacramental Ministry (Baptisms, Confirmation, Eucharistic Celebrations, Confessions, Marriages, Anointing of the Sick) allowed him to touch thousands of lives in a very personal way and brought much joy to his life. He was part of the diocesan Tribunal for fourteen years; diocesan coordinator for family life programs; co-director of the diocesan RENEW experience; Diocesan, State, and Provincial chaplain for the Knights of Columbus; priest representative to the Michigan Catholic Conference Board; Chairman of the Genesee County Board of Education; the priests Retirement Board; Vicar for the Genesee Region, and Vicar General for the diocese for thirteen years; spiritual advisor for the Diocesan Cursillo Movement for thirteen years. Throughout his life, Msgr. Fedewa was always very grateful to family, parishioners and friends for their love, support, trust and often recommended them to God’s loving care. Special thanks to the staff of Hazel Findlay Manor for their loving care of Monsignor Fedewa. To God belongs praise, honor, and glory for all eternity. The Mass of Resurrection will be celebrated at 11:00 a.m., Monday, June 12, 2017 at St. Mary's Catholic Church, Westphalia with the Most Reverend Earl Boyea presiding. Rite of Committal will follow at St. Mary's Catholic Cemetery. The family will receive friends Saturday, from 2-4 and 6-8 p.m. at the St. Mary's Funeral Chapel, 210 N. Westphalia St., Westphalia, with a rosary being prayed at 3:00 p.m. and 7:00 p.m. Visitation will continue on Sunday from 2-4 and 6-8 p.m. at St. Mary's Catholic Church, with a rosary being prayed at 3:00 p.m. and a Scriptural Vigil Service at 7:00 p.m.Family and friends are also invited to visit Monday morning from 10:00 a.m. until the time of the service at the church. Arrangements are entrusted to Lehman Funeral Homes. Online condolences may be made at www.lehmanfuneralhomes.co