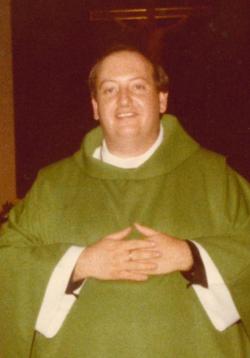 Rev Philip Gallagher, Senior Priest of the Diocese of Lansing entered eternal life on June 23, 2014. He was 67 years old.
Born in Philadelphia, PA he was ordained for the Diocese of Lansing on October 14, 1978 after completing priesthood studies at St John Provincial Seminary, Plymouth, MI.  Prior to ordination he served on the faculty of Father Luke M Powers High School, Flint. After ordination he served as parochial vicar (associate pastor) at parishes in Lansing, Davison, Ann Arbor and Jackson.
He served as pastor of St Leo the Great Parish, Flint (1986-91) and Most Holy Trinity Parish, Fowler (1991-97).  From 1997-2000 he served at St Francis Retreat Center, DeWitt and was then appointed Sacramental Minister and Chaplain of Powers Catholic High School, Flint. From 2002-08 he was Sacramental Minister at St Michael and Sacred Heart Parishes in Flint.  He attained Senior Priest Status in 2008.
A funeral Mass celebrated on June 27, 2014 at St John the Evangelist Church, Jackson with Bishop Earl Boyea as main celebrant.
Go Back | Send this page to a friend