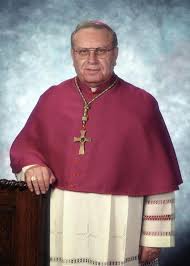 Retired Buffalo Bishop Edward U. Kmiec, who led a historic and tumultuous reorganization of the Catholic Diocese of Buffalo and also had to confront allegations of abuse against some priests, died Saturday after a brief illness.

Kmiec, who served as bishop of Buffalo from 2004 until his retirement in 2012, had been in declining health the past several months and died peacefully Saturday just before midnight, the diocese announced on Sunday. He was 84.

Kmiec was named the 13th bishop of Buffalo in August of 2004. He later recalled his feelings about coming to Western New York after having served as bishop in Nashville, Tenn., a much smaller and simpler diocese.

"I'll tell you very simply: I was scared to death when I first came here," Kmiec said during a 2011 interview.

Kmiec arrived at a time when bishops across the country were overhauling their dioceses and shuttering church buildings to confront a decreasing Catholic population, a shortage of priests and declining attendance at Mass.

During the summer of 2005, he would take on those same realities in Buffalo with a restructuring plan the diocese dubbed "Journey in Faith & Grace.”

By the fall of 2011, Kmiec had closed more than 70 worship sites across eight counties and reduced the number of parishes from 265 to 169. He also shut down 25 elementary schools.

The gregarious, affable bishop absorbed plenty of criticism from area Catholics for shuttering venerable old churches and splintering tightly woven parish communities that dated back more than a century.

But Kmiec's supporters, including many priests, said the changes were necessary and long overdue, despite all of the unpleasantness.

Kmiec wasn’t bishop when the sexual-abuse scandal broke in Buffalo, but he had a checkered history dealing with abuse claims. He was criticized for his mishandling of an abuse allegation while bishop in Nashville, an accusation the diocese denied.

As a bishop of Buffalo, Kmiec would quietly remove two priests from ministry but refused to say why. Years after his retirement, diocese officials acknowledged that the priests had credible allegations of child sex abuse or inappropriate behavior with children lodged against them.

Kmiec described his experiences as a priest and bishop as sometimes daunting and frightening, but more often satisfying and fulfilling. He often relied on a favorite prayer from St. Teresa of Avila, which concludes with the words, "Whoever has God lacks nothing. God alone suffices."
In fact, as a young seminarian Kmiec envisioned himself being pastor of a small Catholic parish on the New Jersey shore, News Reporter Jay Tokasz wrote in 2011. But Kmiec later came to understand that while he had a plan for himself, God had a better one.
Born June 4, 1936, in Trenton, N.J., Kmiec was the son of Polish immigrants, the youngest of five children.

He left New Jersey to attend St. Charles College in Catonsville, Md., and later earned his bachelor’s degree from St. Mary’s Seminary in Baltimore in 1958.

Kmiec continued his theological studies in Rome, where he earned a graduate degree from the Gregorian University and was ordained to the priesthood on Dec. 20, 1961 at St. Peter’s Basilica.
Upon returning to the United States in 1962, Kmiec served as associate pastor of St. Rose Parish in Belmar, N.J., before being named secretary to the bishop of Trenton, a position he would hold through 1980.

Kmiec was personable and down to earth. He liked to talk sports and smoke a good cigar on occasion.

After his retirement, Kmiec was Bishop Emeritus of Buffalo and resided at the St. Joseph’s Cathedral rectory, but enjoyed spending summers on the New Jersey shore visiting friends and family from the Trenton area, where he grew up.

Kmiec for years was hobbled by spinal stenosis, a painful back condition which causes leg numbness and forced him to walk with a cane and stand on his feet for only short periods of time.
Bishop Edward B. Scharfenberger released a statement Sunday that recalled Kmiec as “one whose kindness, warm and pastoral spirit guided, comforted, and revealed Christ to so many throughout his nearly 60 years of priesthood.”

“We mourn his passing, but are also joyous in the sure knowledge that he is now with the One who motivated his life’s purpose and who has called this good and faithful servant home,” Scharfenberger said.

Funeral plans have yet to be announced.