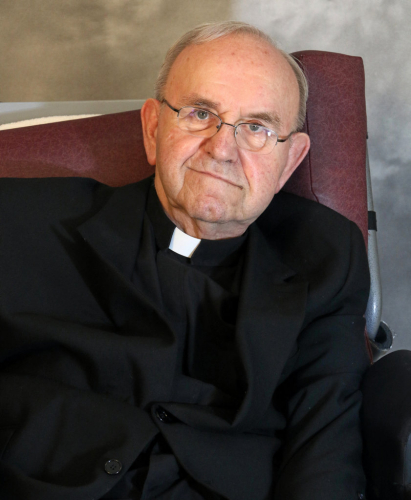 Monsignor was born in Scranton, son of the late Roman and Anna (Duchak) Beeda.

He received his early education in the Scranton Public Schools. He studied for the priesthood at the University of Scranton, Christ the King Seminary, St. Bonaventure, New York, and North American College, Rome. He was ordained at St. Peter's Basilica in Rome by Archbishop Martin O'Conner, D.D., rector of the North American College, on Dec. 20, 1961. He then returned to his studies and received his Licentiate of Sacred Theology at Gregorian University in June of 1962.Monsignor Francis Joseph Beeda, 82, pastor emeritus of St. Joseph Church and the former St. Stanislaus Church, Hazleton, died Saturday at Allied Meade Street Senior Community (formerly Little Flower Manor), Wilkes-Barre.He was appointed administrator of Sacred Heart, Wilkes-Barre, in 1974. His first pastorate was at Sacred Heart of Jesus Church in Wilkes-Barre, where he served for 11 years before being named pastor of St. Joseph Church in Hazleton in 1985. In July 2006, he became pastor of St. Stanislaus in Hazleton along with his pastorate duties at St. Joseph's. Following a stroke, he retired in May 2009 and resided at Little Flower Manor in Wilkes-Barre.

Monsignor was named prelate of honor of his holiness on March 17, 1983.

He served as a part-time professor at St. Pius X Seminary, Dalton, and College Misericordia, Dallas. He was appointed regional moderator of the Diocesan Vocation Program for the Greater Wilkes-Barre area and Chairman of Region VII for the "Follow Christ" Program.

Monsignor was a life member of the North End Slovak Citizens Club. He was a 4th Degree Member of the Knights of Columbus, Assembly 925 (Wilkes-Barre) and a member of the International Order of the Alhambra, in Alhamar 4. He was Co-Founder of the Slovak Heritage Society of NEPA.

Ever-proud of his ethnic heritage, Monsignor Beeda was a strong advocate and supporter of the Catholic church in Slovakia, having welcomed many members of the Slovak church hierarchy to the United States. He was honored too include among his dear friends, Cardinal Jozef Tomko, Prefect Emeritus of the Congregation for the Evangelization of the Peoples, Rome, Italy. Until the time of his death, Monsignor Beeda served as a member of the national board member of the Slovak Catholic Federation and was active with the work of the Conference of Slovak Clergy which provides financial support to the Pontifical Slovak College of Ss. Cyril and Methodius. Rome, Italy. Monsignor Beeda maintained many deep friendships with people in Slovakia and visited the republic of Slovakia many times throughout the years. It was in this capacity he was invited to attend a celebration in Slovakia marking World Communications Day and the 130th anniversary of the birth of Father Joseph Murgas. He had the honor of presenting Proclamations from the mayor of Wilkes-Barre, Lee Namey, and the president of Group 7 SCS, Michael Horvath, to the mayor of Tajov, Slovakia.

Monsignor Beeda was preceded in death by his sister, Lois Savero; and brother, Thomas Beeda.

The viewing will take place from 3 to 7 p.m. Wednesday in St. Joseph's Church (Parish of Ss. Cyril and Methodius), 604 N. Laurel St., Hazleton. A solemn Vespers service will begin at 7 p.m. in the church.

A Pontifical Mass of Christian Burial will be celebrated at 10 a.m. Thursday by the Most Rev. Joseph C. Bambera, D.D., J.C.L., Bishop of Scranton in St. Joseph's Church (Parish of Ss. Cyril and Methodius), Hazleton. A viewing will also take place on hour prior to the 10 a.m. funeral Mass. Interment will take place in Holy Family Cemetery, Throop.


Go Back | Send this page to a friend