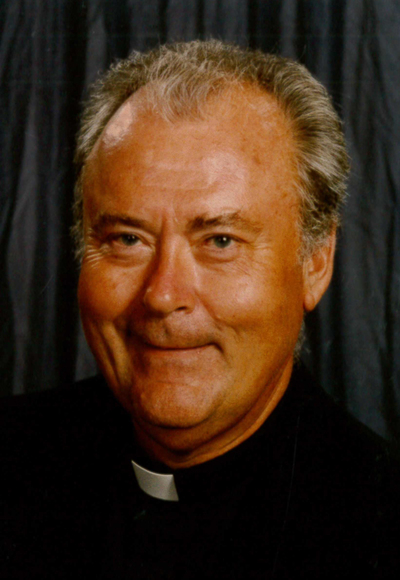 Father Offutt began grade school at St. Brendan School in Mexico.  When the family moved to Toronto, Ontario, Canada for eight years from 1946-1954, he attended Our Lady of Sorrows Elementary School and three years at De La Salle “Oaklands” High School.  Upon the family’s return to Missouri, he attended St. Brendan High School in Mexico, graduating in 1955.  Father Offutt entered seminary formation at Cardinal Glennon College in St. Louis from 1955-1959, graduating with a Major in Philosophy and a Minor in Education.  He then attended the Pontifical North American College in Rome from 1959-1963, graduating with a Licentiate in Sacred Theology from the Pontifical Gregorian University.

Father Offutt was ordained to the Holy Priesthood of Jesus Christ on December 19, 1962 at Christ the King Church in Rome by His Excellency, Archbishop Martin J. O’Connor, Titular Archbishop of Laodicea and Rector of the Pontifical North American College.  After graduation from the Pontifical North American College, Father Offutt returned to his home parish to offer a Solemn Mass of Thanksgiving at St. Brendan Church in Mexico on July 28, 1963.  Father Offutt attended graduate studies at the University of Missouri in Columbia from 1964-1969, earning a Master’s Degree in English.  He attended the University of Notre Dame in South Bend, Indiana, from 1969-1976, earning a Master’s Degree in Sociology in 1970 and his Ph.D. in Sociology in 1976.

A Visitation Service will be at Holy Spirit Church, 404 South Rollins Street, Centralia, Missouri, on Monday, January 20, 2020, from 3:00pm until 6:30pm, with an Ecumenical Wake Service at 6:30 pm.  A dinner will follow in the parish hall.

The concelebrated Mass of Christian Burial will be Tuesday, January 21, 2020, at 10:00am at St. Brendan Church, 615 South Washington Street, Mexico, Missouri.  Bishop W. Shawn McKnight will preside and Father Russell R. Judge will be the homilist.  A luncheon at the Knights of Columbus Hall in Mexico, Missouri, will follow the Mass.  Burial will be in his family’s plot at St. Brendan Cemetery in Mexico.