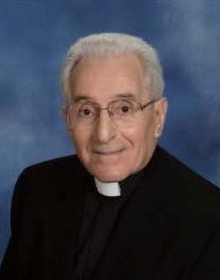 Father Frank Palermo, a Roman Catholic priest of the Diocese of Springfield-Cape Girardeau, died on March 3, 2018, at Mercy Hospital in Springfield, Missouri. He was 88.

Father Palermo was one of the first priests of the newly formed missionary Diocese of Springfield-Cape Girardeau and served faithfully with all seven of its bishops for his almost 63 years of priesthood. As pastor he served in a variety of parishes throughout southern Missouri including: St. Mary Parish, Pierce City; St. Henry Parish, Charleston; St. Mary Parish, Seneca; Nativity of Our Lord Mission Church, Noel; Sacred Heart Parish, Webb City; St. Catherine of Siena Mission Church, Humansville; Sacred Heart Parish, Bolivar; St. Peter the Apostle Parish, Joplin; St. Mary Parish, Lamar; and St. Joseph Mission Church, Golden City. Father Palermo also served as parochial administrator of St. Elizabeth Ann Seton Parish in Springfield and St. Francis de Sales Parish in Lebanon. He also served for many years in hospital ministry as Chaplain of the non-Catholic hospitals in Springfield and as Chaplain at St. John’s Regional Health Center (now Mercy) in Springfield, which he did with much care and compassion for those whom he served and their families. After retiring from active ministry in 2000, Father Palermo became Senior Priest in Residence at Holy Trinity Parish, Springfield, where he continued to serve the people of God until health issues made it necessary for him to move to Springfield Villa.

The Rite of Christian Burial (funeral Mass) will be celebrated at 11:00 a.m. Wednesday, March 7, 2018 in Holy Trinity Catholic Church, by The Most Rev. Edward M. Rice, Bishop of Springfield-Cape Girardeau. Concelebrating the liturgy will be Bishop Emeritus John J. Leibrecht and the priests of the diocese. Burial will be in Resurrection Cemetery in Springfield.