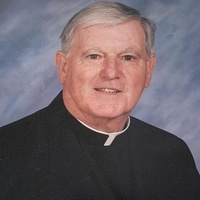 BRADY, Monsignor Roger J. of Bedford, formerly of Everett, entered into eternal rest on Monday, February 25, 2019 at his home in Bedford.  He was 86 years old. Beloved son of the late Roger and Delia (Costello) Brady. Dear and devoted brother of Sr. Alice Mary Brady, CSJ of Milton, Alice Brady Cianci of New Britain, CT, Barbara A. Brady of Everett, and the late Mary Griffin, Francis J., Robert M., and John Brady. Msgr. Brady is also survived by several loving nieces and nephews. Msgr. Brady will lie in repose in the Immaculate Conception Church, 487 Broadway, Everett, on Saturday, March 2 from 9:30 a.m. until 11:30 a.m. with a Concelabrated funeral Mass at 11:30 a.m.  Interment in the Woodlawn Cemetery will be held at a later date.  In lieu of flowers, contributions in Msgr. Roger J. Brady’s memory to Bethany Health Care Center, 97 Bethany Road, Framingham, MA 01702 would be sincerely appreciated.   Parking with attendants on duty.  Monsignor grew up in the Immaculate Conception Parish , Everett, along with his three brothers and four sisters.  After attending the parish grammar school and Christopher Columbus High School, he prepared for priesthood at St. Clement’s Hall, Brighton.  Cardinal O’Connell Preparatory Seminary, Jamaica Plain, and St. John Seminary, Brighton.  He was ordained on February 3, 1958 by the late Cardinal Cushing at the Cathedral of the Holy Cross.

Monsignor Brady’s previous assignments were at: St. Margaret, Burlington; St. Jerome Parish, Arlington; and Holy Name, West Roxbury. In 1970 he became chaplain to three area hospitals: Malden, Melrose-Wakefield and the Lawrence Memorial in Medford.  After completing a year of Clinical Pastoral Training at the V.A. Medical Center in Bedford, he was appointed staff chaplain at the V.A. Medical Center, Canandaigua, New York.  In 1976 he returned to Bedford as chief of Chaplain Service where he served for 14 years.

Monsignor Brady was elected the first president of the National Conference of V.A. Catholic Chaplains. He also was a member of the Presbyteral Council, Archdiocese for the Military Services.  He was appointed to the Board of Consultors, Archdiocese for the Military Services and a member of the U. S. Catholic Conference Commission on Certification and Accreditation.

In 1992, he was names National Director of Chaplain Service with responsibility for 1,100 chaplains of all faiths serving in 172 V.A. Medical Centers nationwide.

“Hospital ministry is unique and not everyone is called to it,” Monsignor Brady pointed out. “For me, it opened up a whole new world.  I found that the Lord is close to the sick and brokenhearted.  There are also many ethical issues today where a priest can be a tremendous help to families who have to make difficult decisions especially at the end of life.”

Invested as a Knight of the Holy Sepulcher and appointed a “prelate of honor” by Pope John Paul II, Monsignor retired in 1995 after 22 years of priestly service to veterans nationwide.

After a three-month sabbatical program at the North American College, Rome, Monsignor Brady returned in January 1996, to serve as temporary parochial vicar at St. Christine Parish, Marshfield. He was appointed Pastor of St. Luke’s on June 11, 1996 and retired on June 10, 2002.