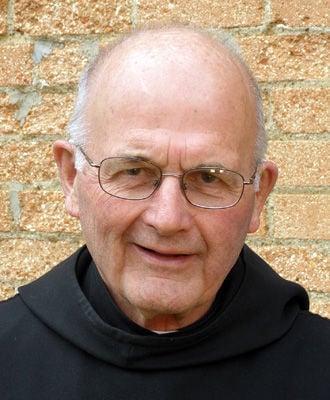 Wake services will begin at 4 p.m. CST with a rosary and vigil service to be held at 7 p.m. CST today at St. Anthony’s Mission.

A second funeral Mass will be held at 10:30 a.m. MST Tuesday, Feb. 9, at Assumption Abbey, Richardton, with Abbot Brian Wangler, OSB celebrating. Burial will follow at the Richardton Abbey Cemetery. Military rites will be provided following the Mass by the Theo R. Zech Post No. 180.

Visitation will be from 4 to 7 p.m. MST Monday at Assumption Abbey with a rosary and vigil service being held at 7 p.m. MST.

The Rev. Stephen was born in Hastings, Minn., April 19, 1926, to Charles P. Kranz and Appolonia (Gergen) Kranz. His father passed away in 1942, which left his mother to complete raising their 10 children. The family members helped with expenses and remained close all their lives. The Rev. Stephen worked at various jobs including a dairy farm and the railroad. He joined the Army Air Corp toward the end of World War II and trained as a tail gunner. The war ended before he was deployed.

Using the G.I. Bill, the Rev. Stephen earned a bachelor of arts degree from St. Benedict’s College, Atchison, Kan., on May 29, 1950. On Aug. 3, 1950, he entered the novitiate at Assumption Abbey, Richardton, and made his monastic profession of vows on Aug. 4, 1951. After completing seminary studies at the Abbey he was ordained to the holy priesthood on May 19, 1955.

On Aug. 15, 1971, his assignment changed again. This time to St. Anthony’s Mission, Mandaree, which began his signature work. For 41 years he served with great love and devotion to the Indian people there. He loved them and they loved him. The Rev. Stephen respected the traditions of the Indian people. No one was outside his love and care. He prayed with them, made frequent house calls, worked with the children, students, and the young and old alike. He brought the Lord to everyone. During his time at the Fort Berthold Indian Reservation he was pastor of St. Anthony’s Mission, and, at various times, also pastor of Sacred Heart Church, White Shield, St. Joseph’s Church, Twin Buttes, and St. Anthony’s Church, New Town. He got to know everyone.

The Rev. Stephen was adopted by Mary (Young Bird) Lone Fight and Cora (Young Bird) Baker. Father was a member of the Low Cap Clan. The Low Cap family will take care of Father’s body in the Hidatsa Way. Father’s Hidatsa name is “Good Bear.” His name was given to him by Art Smith. Father also has a song that goes with his name.

During the summer months of most of his 41 years at Mandaree he had Mass at Mossette Bay for people who have houses or trailers by Lake Sakakawea. Through this means he made many more friends from Bismarck, to Williston, to Dickinson and all places between. At his retirement on June 28, 2012, he integrated easily back into monastic life at the Abbey. He was well liked, enjoyed having fun, helped out with work, and was an example with his devotion to the Community Prayer, Mass, etc.

He was preceded in death by his parents and six brothers.

He is survived by one brother, John (Marlys) Kranz; and two sisters, Dolores (James) Wilkie and Margaret (Paul) Kane; and by numerous nieces and nephews.

Remembrances and condolences may be shared with the family at www.stevensonfuneralhome.com. (Stevenson Funeral Home & Crematory, Dickinson)