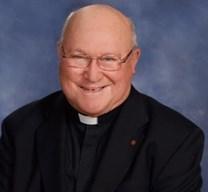 The Reverend Monsignor Frederick J. Florek, passed away on Saturday October 11, 2014 in Lake Charles Louisiana where he was preaching on behalf of Food For The Poor. Fr. Fred as he was fondly known was born on December 18, 1936 in Burnham, Illinois. He was the son of Joseph and Mae Florek. He attended Thornton Fractional North High School in Calumet City and St. Procopius College in Chicago. He came to San Diego to continue his studies for the priesthood at Immaculate Heart Seminary and was ordained to the Priesthood on March 19, 1963. After ordination he served as an associate pastor in various parishes in the Diocese of San Diego. In 1977 who was appointed as the founding Pastor of Saint Elizabeth Seton in La Costa (Carlsbad) CA. His next pastorate took him to St. Mary's Escondido where he served June 1990. In July 1990 he returned to serve as Pastor of St. Therese of the Child Jesus in San Diego where remained until his retirement in 2010. Fr. Fred was best known for his compassion for his parishioners, his love the Sacred Scriptures and preaching. In retirement he continued to use these gifts by enlisting as a preacher for Food For The Poor, a private non-profit organization that cares for the poor in Haiti and surrounding areas. Fr. Fred is survived by his loving sister Louise A. Malewicki (wife of Louis Malewicki), nephew Louis E. Malewicki, nieces Pamela A. Madryk and her husband Rob, Sherri L. Malewicki Cunningham, Rita M. Malewicki Van Tichelt and her husband Derek, great nieces Tara L. Malewicki, Allision H. Cunningham, and Ashley M. Van Tichelt, great nephews Timothy L. Malewicki and Griffin P. Van Tichelt. Services for Fr. Fred will be held at St. Therese Catholic Parish, 6016 Camino Rico, San Diego. The Vigil and Reception of the Body is on Sunday October 19 at 7:00 p.m. followed by a viewing. The Funeral Mass will on Monday morning at 11:00 am. Fr. Fred will be laid to rest at Holy Cross Cemetery with his parents Mae and Joseph Florek Calumet City, IL. Acknowledging Fr. Fred's love for Catholic Education in lieu of flowers his family has suggested that donations in his name be made to Bishop Flores Memorial Fund for Catholic Education.