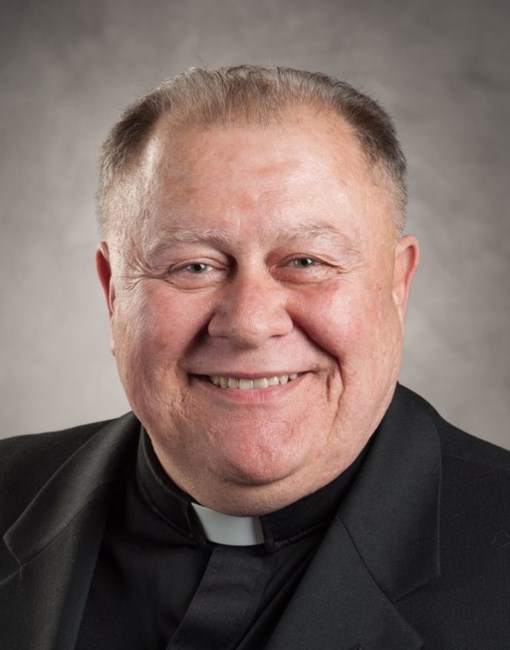 Father Ben Bacino passed away unexpectedly on May 8, 2018. He was born to Sam and Dorothy Bacino on June 10, 1948. He will be missed not only by the many people whose lives he touched in his 43 years of Priesthood, but especially by his brother, aunt, nieces and many cousins. He was preceded in death by his mother, father, and older brother, Charles Sam. He leaves to mourn him, his brother Jim Bacino, his aunt Kathy Bacino, Nieces, and as well as Bacino and Zancanella cousins too numerous to mention. He gave his family such joy as they watched him grow from a mischievous little boy who loved to joke and clown around at family gatherings, into a beloved priest who counseled his flock with love and compassion. His was a very special calling from God. He attended Resurrection College Seminary in Kitchener Ontario Canada, College of Santa Fe, and St. Thomas School of Theology in Denver. Attended Adams Sate and received his Master’s Degree in counseling. He served in so many parishes in the diocese: Alamosa, Holy Rosary in Pueblo, Walsenburg, La Junta, Ordway, Grand Junction, La Veta, Gardner, Chama, Holy Family in Pueblo, St. Leander in Pueblo, and St. Mary Help of Christians. In addition, he served at the Correctional Facilities in Canon City and as President of the St. John Neumann School Board. He also served as coordinator for Campus Ministry, Dean of the Walsenburg-Trinidad Deanery, Member of the Diocesan Financial Advisory Council, Clergy Personnel Committee, the Historic Southside Catholic Community Committee, and was a Faithful Friar and Chaplain for the Knights of Columbus. In addition, he was a Diocesan Boy Scout Chaplain, a member of the Nocturnal Adoration Society and of Jesu Caritas, along with being the Spiritual Advisor for the Altar & Rosary Society, and Champlain of Sons of Italy Pueblo.

He will be missed by many. Father Ben will lie in state at St. Mary Help of Christians from 3:00 p.m. until 6:00 p.m. on Wednesday, May 16; Vigil to follow at 6:00 p.m. Mass of Christian Burial will be held at the Cathedral of the Sacred Heart in Pueblo on Thursday, May 17 at 10:00 a.m. Entombment will follow at Roselawn Cemetery with a reception at St Joseph Parish Hall immediately after. In lieu of flowers, donations in support of Catholic Education may be made in memory of Father Ben Bacino to the Catholic Foundation of the Diocese of Puebl