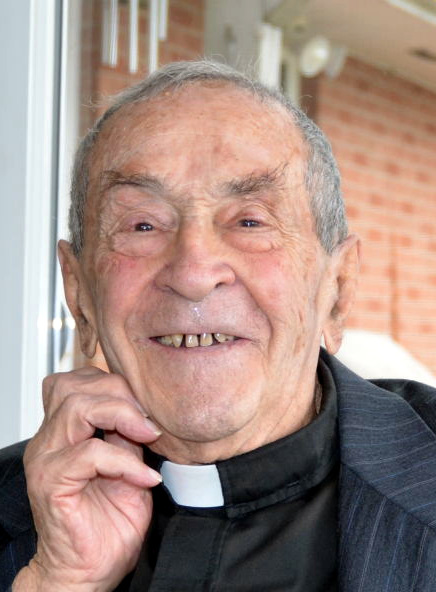 Reverend Father Hilarion V. Cann, 90, of Bridgeport, WV, passed away peacefully, on Monday, May 6, 2019, at the United Hospital Center. He was born in Clarksburg, WV, on December 27, 1928, a son of the late James and Antoinette Oliverio Cann.

He received his early education in the Catholic school in Clarksburg. He attended high school and college seminary in Baltimore, graduated from St. Charles Seminary in 1947 and from St. Mary’s Seminary with a B.A. in Philosophy in 1949. From 1949 to 1956, he continued his studies in Rome and was ordained there on Feb. 28, 1953. He graduated from the Gregorian University with an S.T.L. (M.A.) in Theology in 1953. In 1956, he earned his doctorate in Canon Law from the Lateran University. After returning to the U.S. in July 1956, Father Cann served in various administrative capacities in Wheeling, holding the office of Presiding Judge of the Diocesan Tribunal from 1956 until 1967.

Additional activities included the Diocesan Ecumenical Commission, Office of Appalachian Ministry, Southern Christian Leadership Conference and others. In 1967, he was one of four religious leaders chosen as “West Virginia Man of the Year” by the Charleston Gazette.

In August of 1967, he was appointed pastor of Immaculate Conception Parish in Fairmont, where he served until 1969. From 1969 to 1980, he was pastor of Blessed Sacrament parish in South Charleston. He became pastor of All Saints in 1980.

He also was named Italian Man of the Year at the 2002 West Virginia Italian Heritage Festival in Clarksburg.

Father Cann retired in the summer of 1996 and continued to reside in Bridgeport, where he remained active in community affairs.

In February of 2018, Cann celebrated the 65th anniversary of his ordination during a ceremony at All Saints.

Family and friends may call at the All Saints Catholic Church, 317 East Main Street, Bridgeport, on Thursday, from 1:00 p.m. to  8:00 p.m. There will be a prayer vigil at 7:30 p.m. to conclude the visitation with Father Chris Turner as presider and Father Pat Wash as homilist.

A Mass of Christian Burial will be celebrated at All Saints Catholic Church on Friday May 10, 2019 at 10:00 a.m. with Father Benedict Kapa presiding and Father Andrew M. Switzer as homilist. Interment will follow in the Holy Cross Cemetery.

In lieu of flowers memorial donations may be made to the All Saints Building Fund, 317 E. Main Street, Bridgeport, WV 26330.

Expressions of sympathy may be extended to the family at www.amoscarvelli.com  A service of Amos Carvelli Funeral Home.