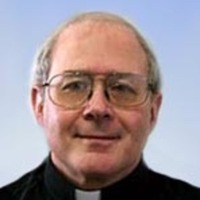 The St. Joseph’s Seminary community mourns the death of Monsignor Michael Curran, a priest of the Diocese of Brooklyn and a professor of Moral Theology. Raised in Brooklyn and a graduate of Cathedral College in Douglaston, New York. Msgr. Curran attended the Pontifical North American College (PNAC) as a seminarian. He was ordained a priest on June 27, 1981, by the late Bishop Francis J. Mugavero. After three years of pastoral service, Msgr. Curran returned to Rome for studies at the Alfonsiana Academy where he earned a doctorate in 1988. He went on to teach moral theology at the Seminary of the Immaculate Conception (1988-1997) before becoming the Director of Studies and Admissions at his alma mater, the PNAC in Rome (1997-2002). Msgr. Curran returned to the Diocese of Brooklyn to assume pastorates at St. Catharine of Alexandria, Brooklyn (2002-2005) and St. Thomas More-St. Edmund, Rockaway Point, NY (2005-2008). The latter two communities merged to become Blessed Trinity Parish, and Msgr. Curran became its founding pastor (2008-2013). In 2013, he joined the faculty of St. Joseph’s Seminary and College, Yonkers, New York where he remained until the present. An advisor to bishops and boards of Catholic healthcare facilities, Msgr. Curran wrote and appeared in the media addressing contemporary ethical issues facing the Church today. “The faithful of the Rockaways, like the seminarians of Dunwoodie, will miss this witty and wise scholar-priest,” said Bishop James Massa. “We commend his humble soul to Jesus the Good Shepherd, whom he served so well in a wide variety of settings.”