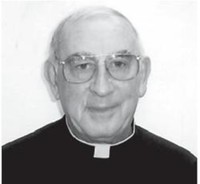 Rev. Thomas P. Delahunty, who served as a priest of the Diocese of Sacramento for nearly 62 years, died April 8. He was 86. He retired from active ministry on May 1, 1995. He was born in Newtown, County Laois, Ireland and attended the National School at Cullohill until age 14, when he entered St. Kieran's College Seminary in Kilkenny. He studied at St. Kieran's for 11 years, five years at the secondary college and six years at the seminary. He was accepted for priestly ministry in the Diocese of Sacramento during his first year of philosophy studies. He was ordained to the priesthood on June 5, 1955 in St. Mary Cathedral in Kilkenny. He served as assistant pastor from 1956 to 1960 at Sacred Heart Parish in Maxwell, where he was involved in the planning and building of the church at Holy Cross Mission in Arbuckle, which was dedicated in November 1958. From 1960 to 1962, he served as assistant pastor of Holy Family Parish in Citrus Heights and from 1962 to 1967 as assistant pastor of Our Lady of the Assumption Parish in Carmichael. While serving in Carmichael, Bishop Joseph McGucken asked Father Delahunty to serve on part-time duty with the U.S. Army Reserve headquartered in Sacramento. During this time he attended the U.S. Army Chaplain School in Fort Hamilton, N.Y., and completed the basic and advanced chaplain courses and was promoted to the rank of captain. In October 1967, with the permission of Bishop Alden Bell, Father Delahunty received his first military assignment to Fort Irwin in Southern California. Subsequently he served as a chaplain in South Korea and promoted to the rank of major; in New Ulm, Germany, Fort Ord, Calif., Fort Hamilton, N.Y., and Tripler Army Medical Center in Honolulu, Hawaii. At Tripler he was promoted to the rank of Lieutenant Colonel. His following assignments included the Presidio in San Francisco; Karlsruhe and Berlin in East Germany; Sinop, Turkey; Tripler Army Medical Center in Honolulu; and his final assignment with the 18th Medical Command and Army Hospital in Seoul, South Korea. During this assignment he was awarded the Legion of Merit. Father Delahunty retired from the U.S. Army in August 1993, having served 28 years of active military service. In retirement, he assisted in parishes in the diocese that needed help with Sunday liturgies. One of eleven children, Father Delahunty is survived his sister, Julia, in Ireland, and numerous nephews and nieces. Vigil service will be held at 7 p.m. on Wednesday, Apr. 26 at St. Patrick Church, 3109 Sacramento St. in Placerville. Bishop Jaime Soto will preside at the Mass of Christian Burial on Thursday, Apr. 27 at 11 a.m. in St. Patrick Church. Concelebrants will be Father John Cantwell and priests of the diocese. Reception following the Mass. Burial following at St. Mary's Cemetery in Sacramento.