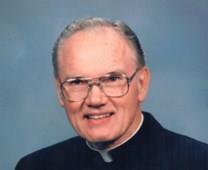 Fr.Arthur  Dernbach was born and raised in Portland, Oregon, and was the youngest member of a family that included 17 children. Like most young men of what we now call the “greatest generation,” he joined the Navy right after his graduation from Central Catholic High School. After the war he attended Mt. Angel Seminary and the North American College in Rome, where he was ordained in 1953. Upon his return from Rome, he taught chemistry and science at Central Catholic for the next 13 years, followed by seven years as a principal of St. Mary’s High School in Medford. From 1974 to 1978 he served as the Director of Education for the Archdiocese. In 1978 he was named Principal of Central Catholic, and oversaw the transition of Central to a co-educational school in 1980, the first year that girls were allowed to enroll.

In 1983 he became the pastor of St. Thomas More Parish in Portland, where he stayed for 14 years. From 1997 to 2001 he served as pastor for the St. Boniface Parish in Sublimity, finally “retiring” in 2001 to the St. John Vianney Residence in Beaverton, an apartment complex for retired priests. In 2008 he became a Monsignor, but he preferred the title of “Father” in his daily life. Of course, Fr. Dernbach didn’t really “retire,” as he took on the duties of apartment complex manager dealing not only with the mundane issues of maintenance, but also assisting many of the other priests in their daily living, while continuing to occasionally fill in at parishes as needed.

In 2015 Fr. Dernbach moved from the apartments to the Maryville facility, where he continued to minister to all he encountered, whether they were staff, fellow residents, or visitors. He was known to roam the halls in his wheelchair, a friendly face to all with a smiling greeting for anyone who came into view. Fr. Dernbach was known for his intellect and amazing vocabulary, his love of chocolate, and his booming laugh. He retained that sense of humor to the very end and was well-loved by the Maryville staff and residents.

As the youngest child of a very large family he was known as “Art” and to his 37 nieces and nephews he was “Uncle Art,” who appeared frequently at family gatherings (and what gatherings they were!). Uncle Art usually arrived with new information about his latest researches into the family tree (he was the family historian) and a box of chocolates (his sisters always gave him the easy assignments). His huge laugh could always be heard over the din of a Dernbach family gathering as the siblings shared stories and teased the “baby” of the family.

He broke the ice with small children intimidated by his size, his voice, and his all-black attire by offering to bless a stuffed animal or favorite doll. Family, friends, and past parishioners alike will greatly miss this man—the last of the Dernbach’s “Greatest Generation.”

Fr. Dernbach was preceded in death by his parents John L. Dernbach and Mary O’Donnell, and by his 11 brothers and five sisters (oldest to youngest): Ralph, John, Benjamin, Cliff, Ray, Alfred, Florence, Bill, Marge, Irene, Leo, Bernice, Mary Jane, Bob, Mike (aka “Ted”), and Edward. Of the 17 children, only 15 survived to adulthood, hence the confusion about the number of children in the Dernbach family. Alfred was only a few months old when he passed away, and Edward was only eight months old.

A funeral mass (with reception to follow at the Cathedral School across the street) will be held on Monday, March 26, 2018 at 11:00 am at St. Mary's Cathedral at 1716 NW Davis, Portland, Oregon.