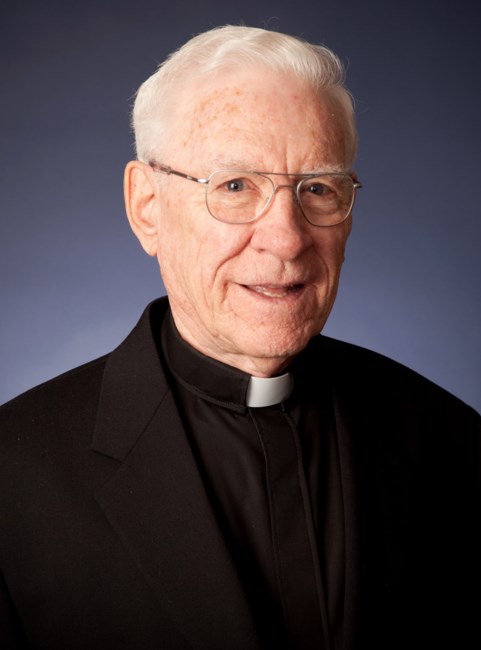 Father Bernard Joseph Ahern, went home to the Lord on Friday morning, July 31, after suffering from a short illness. He was 93. He was a senior priest serving at St. Joseph Parish in Jacksonville.

The son of Daniel Joseph Ahern and Elizabeth Nee Klaue Ahern. Bernard, was born on Oct. 30, 1926, in East Durham, N.Y. He had three sisters Eileen, Elizabeth and Johanna.

Father Ahern was a priest for 66 years, but he didn’t always wear the Roman collar. For 25 of those years, he wore the uniform of a U.S. Navy Chaplain with a captain’s insignia and several rows of service ribbons. And he was awarded the Bronze Star in 1970. Before retiring from the Navy in 1985, he was assigned to Naval Air Station, Jacksonville where he served the men, women and families at St. Edward Chapel. As Senior Chaplain, he was also responsible for Cecil Field and Mayport.

Father Ahern’s history in the Navy goes back to World War II when he enlisted as a second class sailor working as an electronics technician. After the war, he attended the seminary at Niagara University and was ordained for the Diocese of Albany, N.Y. on June 12, 1954. His first assignment was to a parish in Troy, N.Y., where he served happily for six years.

Then he witnessed an unhappy incident that directed him back in the Navy. A promising young man from his parish had enlisted in the service. “After two years,” explained Father Ahern, “I saw the kid come home ruined.” This experience made the Father Ahern seek a place for himself in the military. Perhaps with his background as a sailor, he reasoned, he would be able to relate to young servicemen and women and prevent them from being affected adversely by military life.

That was in 1960. Twenty-one years later, Father Ahern had earned retirement, but he had no desire to leave. “There’s such a shortage of priests in the military,” he explained in an article that was published in 1982 in Community for the Diocese of St. Augustine.

Before reporting for duty in Jacksonville in early December 1981, Father Ahern was stationed at Camp Lejeune, N.C. His years before that include service in Pennsylvania, California, Hawaii, Rhode Island, Virginia, Washington, DC, the Philippines, aboard the USS Iwo Jima in the Mediterranean, and “the worst year of my life” – spent with the Marines near Da Nang in Viet Nam.

During the periods when he was not aboard a ship or at war, Father Ahern had an advantage, which he said made him “the luckiest priest in the world.” His mother, Elizabeth (and his father, Daniel before he died) accompanied him on his tours of duty, making a home for him in each new place, including Jacksonville.

While serving at St. Edward Chapel on base, Father Ahern’s days were tightly scheduled with administrative duties and counseling appointments.

More than anything else, his counseling dealt with marriage problems. “Our society is the biggest contributor to marriage difficulties, not the military,” he said. He was a team priest for the World Wide Marriage Encounter for many years and Marriage Renewal Enrichment weekends in the Diocese of St. Augustine for nearly three decades.

“I aim to strengthen the community here – to make it really a family of believers who love each other, are concerned with each other, and who reach out to each other in their needs.

“This may sound idealistic, but to me, that’s what makes a parish,” said Father Ahern.

Father Ahern retired from the military in December, 1984. He returned to his Albany diocese and served as Pastor of St. Joseph Parish in Ft. Edward, NY for six years until his retirement in 1991. He was granted faculties in the Diocese of St. Augustine and has served at St. Joseph Parish in Jacksonville since 1991.

As with all his past assignments, Father Ahern lovingly served the many men, women, and families in several ministries at one of the diocese’s largest parishes.

On Feb. 29, 2020, Father Ahern was incardinated a priest of the Diocese of St. Augustine.

“Father Bernie was always available to care for others, especially sinners in need of mercy, the sick in need of prayers and visits,” said Bishop Felipe Estévez. “He loved his country with passion. His contribution to strengthening marriages and family life is immense. I will treasure his wisdom.”

In lieu of flowers, donations may be made to St. Joseph Catholic Church Capital Campaign,